A Bitter Deal Versus A Raw Deal 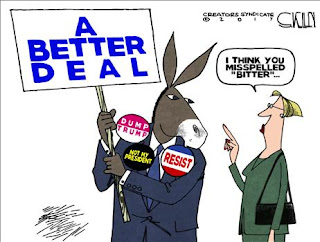 Choices. Life is all about choices. God gives us free will to pick and choose how we want to live. Most choices we face are mundane. White bread or wheat? Coke or water? In the short term there isn't much of a real consequence. In the long term there might be more severe consequences. Coke may taste better than water and be quite thirst quenching but it can rot out your stomach lining and teeth over years of drinking it. Every choice has a certain consequence that goes with it be it positive or negative. Some choices are very clear and distinct while others are more difficult and blurred. Same goes for elections and who we choose to vote for. With the midterms this November there will be a choice between a bitter deal or a raw deal.

If you choose to cast your vote for Democratic Party candidates and a "Blue Wave" sweeps across our republic ushering in a Democrat controlled United States House and Senate then you will have opted for a bitter deal. They will more than likely nominate Nancy Pelosi for House Speaker and she will again take the gavel and lead a charge to reverse much of what President Trump has done thus far. They will go after President Trump and offer up impeachment proceedings against him and convict him. It isn't like a real court of justice but purely political theatrics. They will accuse him of high crimes and misdemeanors and on strictly circumstantial evidence find him guilty to be removed. Much to the chagrin of liberals that won't mean Hillary Clinton becomes president. No, you will have a President Pence. Democrats will try to push through amnesty for illegal aliens and won't fund or build a border wall. They will be staunchly supporting open borders. They will try and rollback the tax cuts and Nancy Pelosi has already said that is their plan. They will work on slowing down the booming economy and grinding things to a halt. A President Pence would veto the Democrats legislation but they could override his veto if they garnered enough votes. There would be gridlock in Washington for the next two years and that would set up the presidential election for 2020. If the Democrats win the presidency in 2020 they would go full throttle towards socialism. That is just an honest assessment of where this road goes. 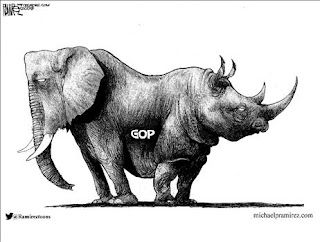 If you choose to cast your vote for the Republican Party candidates in November you will be voting for primarily a raw deal. What do I mean? Well, as much as President Trump has done he has had very little help from Congress. Short of the tax cuts and the Supreme Court nominations the members of Congress have failed to deliver a repeal and replacement of Obamacare, to defund Planned Parenthood, to build the wall, and to work on enforcing our immigration laws. There are far too many establishment Republicans and RINO's, Republicans in name only, who populate the ranks of the Republican Party. There are some really good conservative statesmen in Washington but they are just too limited in effecting much change. There will be certain areas where the Republican candidate will be a fresh conservative leader to vote for. In Michigan for example, John James is clearly a very good candidate and far better than the progressive candidate he is running against, Democrat Debbie Stabenow. Mr. James is 37 years old and a real refreshing conservative voice. The people of Michigan will have a chance to add another conservative to Washington and help put pressure on the Republican Party leaders to support more conservative legislation. In Wisconsin however, you have more of an establishment Republican running in the likes of Leah Vukmir. The question for Wisconsin voters is whether she is a better choice than the progressive Democrat Tammy Baldwin. The answer is Vukmir may be more of an establishment Republican but she is clearly better than Baldwin. Conservatives in Wisconsin will have to hold their noses and vote for Vukmir. The stakes are too high.

A bitter deal or a raw deal? On the surface it looks like a blurred choice. Socialism or more Republicans doing pretty much nothing? But the choice is much starker if you look at it closely. It becomes an ideological choice between socialism and capitalism. A choice between freedom and liberty on one hand and tyranny on the other hand. Many will say that voting doesn't really matter. They are politicians and are all just worthless. Far too many people are apathetic and ignorant. Many conservatives will say why should I vote for an establishment Republican or a RINO? I understand that sentiment completely. It is so hard to step into that booth and cast a vote for a Republican candidate who you know just pays lip service to real conservative ideas and principles. But here is the blunt truth. If you vote for the Democrats and accept their bitter deal you endorse open borders, higher taxes, redistribution of wealth, class warfare, and the path to a Marxist-Leninist socialist country. You will be voting for a system of government that is completely antithetical to our Constitution and our founding fathers vision. If you stay home and sit out the midterms you will be allowing the Left to completely negate your votes in 2016. The liberals are energized and will turn out to vote. If conservatives fail to understand this basic truth then your vote was wasted two years ago when you came out to vote for President Trump. You can either hold your nose and vote for Republicans who may not be real conservative thinkers and hope to hold their feet to the fire and effect some real conservative legislation or you can stay home and sit on your high horse and watch as your last chance to try and save this republic gets ripped away by a progressive crowd that hates America and everything it represents throughout history. Your choice my friends. Choices have consequences. Your choice this November is a simple one. Socialism or capitalism? 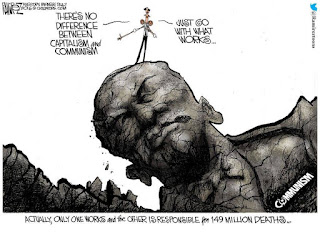