Showing posts from January, 2016
Show all

With the excitement and euphoria surrounding Sen. Bernie Sanders, especially from younger people, I often ponder why does socialism continue to lure in people. After years of historical evidence and the clear failure of the socialist ideology in numerous countries you would think it would be laughed off in a New York minute. And especially in America, where our founding fathers set up a constitutional republic, escaping the tyranny of a king. Yet, we find a self-proclaimed socialist in Bernie Sanders, drawing crowds of screaming fans, especially Millenials. Why? I have pondered this now for several weeks, and it is not a simple answer. I do believe part of it is due to our education system, which is constituted of a majority of liberals, shaping and molding the minds of our youth to the acceptance and positives of socialism. Since the 1960's the Left has managed to work their way into the education system at every level and been able to rewrite our history and reshape our you
1 comment
Read more

January 29, 2016
Trump Derangement Syndrome? I, like I am sure most of you, have been closely following the Presidential candidates as this campaign season rolls along, and I have been quite intrigued by the Donald Trump phenomenon.  At first glance, I must say I was curious, to see how his demeanor and ideas would fit in on the Republican race.  I was keeping an open mind and figured he was a successful businessman and showman who has never held a political office position.  A different breed of man and outside of the establishment. As the months have gone on, I have increasingly observed and shared with folks, that Mr. Trump is a progressive liberal Democrat from New York City and far from being a conservative.   From his close relationship and donations to the Clinton Foundation, to his picture with Rev. Al Sharpton, to his support of eminent domain, to his support of ethanol subsidies, to Senator Harry Reid pulling for him, and the list goes on and on.  He is definitely a good showman and a mad
Post a Comment
Read more 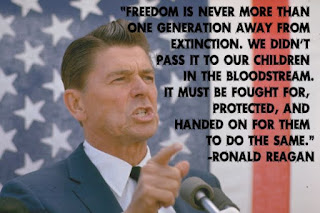