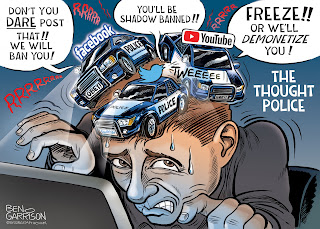 The thought police are alive and well and coming to your house, if you are a conservative thinker that is. Twitter decided to use their iron fist after the U.S. Capitol events to begin purging conservative accounts on their social media platform. Google and Apple decided to ban Parler from their app download stores on smartphones. Yes, Big Tech wants everyone to know they are the enforcers of what constitutes legitimate thought and what is deemed hate speech. Welcome to George Orwell's "1984". He should have entitled it, "2021".

This should send chills down your spine. Some will say these are businesses and thus they are allowed to choose who is on their various platforms. It's not a free speech issue they say and it doesn't bother them at all. While Twitter and Facebook are perfectly free to purge their users under their user agreements it should be a warning of what is to come. Remember Big Tech companies control much of the internet. These platforms have become the public square in a high tech world. When they begin removing people for being "dangerous" or engaging in what they deem "hate speech" and they explicitly target conservatives while continuing to let groups like Antifa and BLM post objectionable materials you see a clear double standard. It's a slippery slope into a world like China, North Korea, Cuba, and other countries with totalitarian regimes.

What will stop a Biden administration from going after conservative talk radio? You may think I am being melodramatic. I assure you I am not. The left has tried for years to shut down conservative talk shows on radio and TV. They have failed and it irks them to no end that these programs have a high volume of listeners. Is it out of the realm of possibility that a government controlled by Democrats would say to radio stations either you remove conservative talk shows on your stations or we will pull your broadcast license and you will be shut down completely? Imagine that or imagine the FCC institutes a set of new standards that radio stations must follow. That would include not allowing any broadcasting of shows that may be deemed to incite and foment unrest with hateful rhetoric. Who defines what language is hateful rhetoric that incites unrest? Those in power control the language and thus they are the final arbiters. The Bill of Rights be damned. 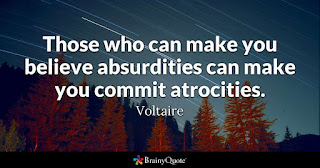 Let's remember how Democrats and their followers treated Donald Trump the last four years. They were relentless in targeting him and his administration. From creating the absurd Russian collusion story to the Ukraine phone call story to the entire impeachment showcase we saw how the Democrats and the mainstream media mesmerized their base with a false reality. Their followers bought into the narrative that President Trump was Hitler and his administration and deplorable followers were Nazis. Day and night they plotted and pontificated how to remove him from the White House.

This never was about Donald Trump. It was about all of those millions of people who elected Mr. Trump president. President Trump was just the face. The target really is the Silent Majority. The Democrats and their followers despise conservative thinking people. They despise God-fearing, gun-clinging, bible-carrying people who have the ability to think rationally and critically about issues. That becomes a threat to them as they continue on the road of transforming America into a communist state. Several people on the left have said removing President Trump will be the easy part. Trying to cleanse America of his followers will be more difficult. That's pretty incendiary language. What do they infer by cleanse? Does that mean re-education camps? Does that mean death camps?

Would you have thought even ten years ago that Americans would submit their freedoms and liberties so easily for a virus? You see how many people freely submitted to draconian lockdowns and mask mandates giving up individual liberty for the collective good of society. Now imagine those same "Karens" that have flipped out on people without masks reporting people with conservative thoughts to government authorities. Doesn't seem to be much of a stretch now, does it? One need not wonder how six million Jews were led off to death in Nazi Germany. 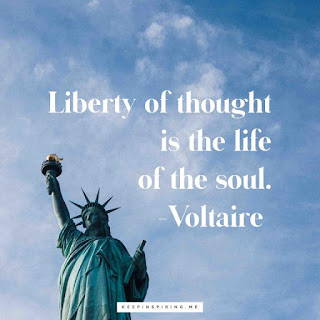 When freedom of speech, free thought, and free flow of information is throttled you move from our constitutional republic into a tyrannical totalitarian regime. This is what China does to its citizens. This is what happens in North Korea and Cuba. This is completely antithetical to the American way of life and our founding fathers' principles. The actions by Big Tech this past week should be extremely alarming whether you are on the right or the left. This won't end well if the Democrats and their rabid base continue to collude with Big Tech companies to limit and control information, free thought, and free speech.
Democrats have full control of all the levers of government in the next few days. Speaker Pelosi already limited what Republicans will be able to do in the House of Representatives. Expect Chuck Schumer to do the same in the Senate. First, they will effectively consolidate power and then they will go about eliminating political opponents. This is what history shows us happens under totalitarian regimes. Democrats can turn around now and check themselves before this evil momentum rolls out of control like a careening bowling ball.
A historical word of warning to those on the left side of the aisle. You may despise Donald Trump and have no problem targeting conservatives in a concerted effort of retribution but be very careful what you wish for. They may begin with conservatives but they won't stop there. They will target other groups. They will eventually eat their own. You may not be woke enough. You may not be liberal enough. The Antifa and BLM enforcers will eventually outlive their usefulness and be purged. Just like Hitler purged the SA in "The Night of Long Knives". The beast must continue to be fed as it grows in tyrannical control. And when you find yourself being hunted you may find nobody left to come to your defense. Then it will be far too late to ask what have we done. 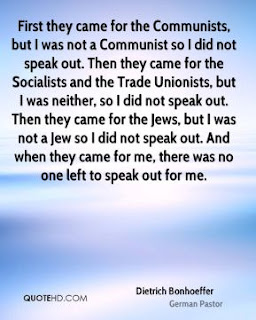