The Democrats have a dilemma. Joe Biden leads the polls for the Democratic Party presidential nomination as he officially announces his candidacy. The barrage of attacks already began even before he officially put his hat in the ring. When you are perceived as the leader the long knives usually come out. The issues revolve around Biden being just a tad too friendly and invasive around women and little girls. Those pictures and video clips have been around for years now but recently a few women have come forward to the press to highlight their own uncomfortable experiences around Joe. But Biden has much deeper problems than being too friendly with his hands and mouth.

The deeper problems involve pay-for-play and obstruction of justice. As journalist Peter Schweizer has highlighted in his book, "Secret Empires: How The American Political Class Hides Corruption and Enriches Family and Friends," Joe Biden and his son, Hunter Biden, have some serious questions to answer involving deals in China and Ukraine. 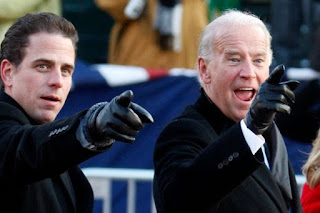 The Ukraine deal involved Hunter receiving millions of dollars from an Ukrainian energy company while Joe directed $1.8 billion in aid money to Ukraine during his tenure as vice president under the Obama administration. The story became even more troubling when Joe Biden pressured the Ukrainian government to fire Prosecutor General Viktor Shokin or the Obama administration would pull a $1 billion in U.S. loan guarantees. That prosecutor did get fired. So why would Biden want this prosecutor fired? Well, that prosecutor was leading a corruption probe into the natural gas firm Burisma Holdings which happened to employ none other than Hunter Biden as a board member. Here are a couple of links to the full story and details on the Ukrainian dealings:

That brings us to China and back to Hunter Biden once again. Hunter was in control of a private equity firm, Rosemont Seneca Partners LLC, back in 2013. He was part of an official U.S. delegation that flew to China aboard Air Force Two alongside his father, then Vice President Joe Biden. Ten days after their arrival in China Rosemont equities inked a deal with the state-owned Bank of China that created a $1 billion joint investment fund. That was later increased to $1.5 billion. Joe Biden was meeting with Chinese President Xi Jinping while his son was working on forging a lucrative business deal with the Bank of China. This again raises some serious questions about how Joe Biden uses his power and position in government to help his family members. Here are a couple links to the full story on the Bidens and China:

Thus we have a quandary for Democrats and Biden. Joe Biden may be their best hope to defeat President Trump in 2020. He has the experience of being a U.S. Senator for thirty-six years and served as Vice President under the Obama administration for eight years. He has been more of a moderate in his past compared to the rest of the candidates already running and could potentially lure back some of the white males and Reagan Democrats who voted for Trump. He could win back votes in states like Wisconsin, Michigan, Pennsylvania, and Ohio which would be crucial for Democrats.

The trouble is the far-left socialists have taken a firm hold of the Democratic Party. Biden is old, white, and a man. He lacks any diversity and he isn't Bernie Sanders. Bernie may be old, white, and a man too but he has that socialist ideology that the far-left find themselves drawn to. Biden has the issues of being too friendly with women and little girls in the era of #MeToo and that will be a lingering concern. Add in the Ukraine and China corruption stories, a history of being gaffe prone whenever Biden opens his mouth, and someone who tries to portray himself as the common man although he has been the ultimate political insider and you have a flawed candidate.

The Democrats will have to decide whether they want to turn to Biden as their savior or roll the dice on a full-scale socialist like Bernie Sanders or choose one of the far-left female candidates like Elizabeth Warren, Kamala Harris, or Kirsten Gillibrand. The mainstream media will continue to control the narrative throughout the process. Will they open up a full assault on Biden and sink him or will they go easy and let him hang around in case they need him to save the day? It makes a very interesting quandary for sure. How the Democrats eventually solve this presidential predicament will determine whether they can win in 2020. Given their track record you might want to bet on their final choice being anything but logical. Paging Tom Perez. George McGovern is on line one.
2020 Presidential Campaign Corruption Democrats Frontrunner Identity Politics Joe Biden Political Insider Politics